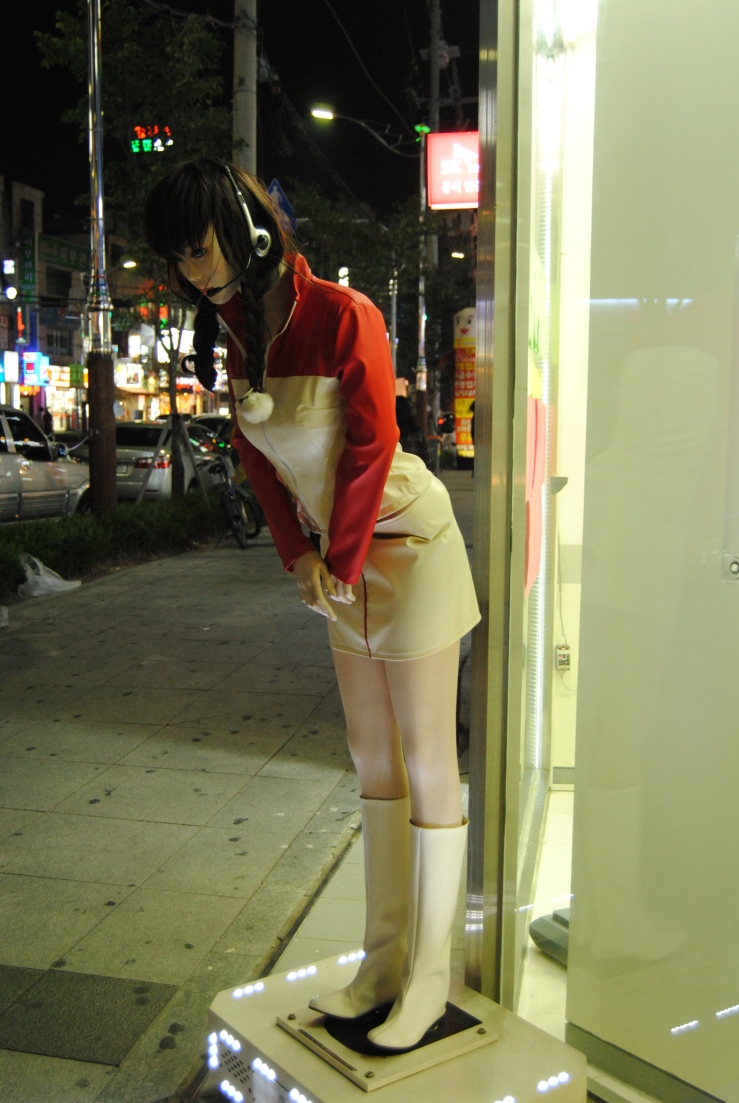 This is my hometown, Bupeyong.
I think I used to see these robots in the past but didn’t remember they existed after 4 years of living in Ottawa.

She definitely freaked me out because she bowed at me as I was walking by.
I thought you might find it interesting since you won’t see this type of scene in the western world yet! 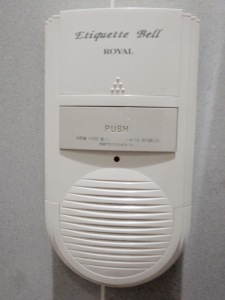 It hides your private sound with the beautiful waterfall music.;)

(click the photos if you want higher resolution of the image)

This is the entrance of Deogsu, 덕수궁.
There is a palace inside which was built during Joseon Dynasty (July 1392 – October 1897), including the national museum of art and forest garden. You will see the beautiful details of the buildings.

When I walked by, there was an event at the entrance. People, who were dressed up like the palace door men, marched briefly altogether and when they stopped, tourists took photos with them. 🙂

Everyone knows that Korea is the best in Cosmetic surgery in the world!

You often see ads on TV (of course), magazines, subways and even on the road.

I feel somewhat proud of the fact that we have the best technology/skills for it and prices won’t be as high as in western countries. At the same time, I feel it’s going a little over the top.
People, who are not considered as being “pretty” people, often have extremely low self esteem because of being part of a superficial society where you need to put a photo of your face on your resume and where you get surgery as a high school graduation gift from your parents.

Anyway,
as a Korean girl myself, I definitely like it when some people tell me Korean girls are the prettiest, 🙂

Traditionally they are made of silk material with different designs (shorter top and wider dress).

The modern ones are basically made for efficiency of movement, washing and maintenance.
Various deep and beautiful colours incline to be used for the traditional silk Hanbok. Whereas, the modern ones tend to be more like earth tone since natural colours from red clay or sand are used.

People generally don’t wear Hanbok anymore unless it’s for special events (weddings) or holidays.
For myself, I can’t remember the last time I wore mine. Probably it was in kindergarten or elementary school for a Korean Fan dance event. lol

You can easily see Hanbok from Insa-dong and I hope you find the one you like! 🙂 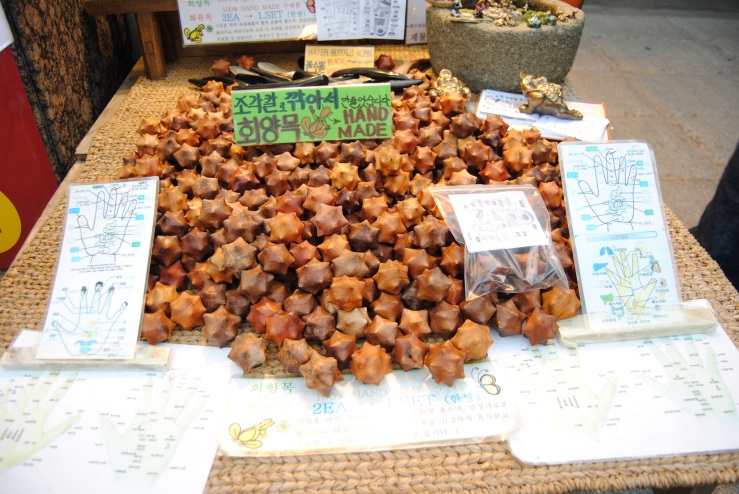 For Korean people, massaging is in their culture.
My mom asked me to massage her almost every time we were watching TV in the living room together. Often, I squeezed her arms and stepped on her back. That’s why I’ve become a massage expert now! lol

When I was walking by this stand (in the photo), he grabbed my attention. First, he was advertising loudly.lol Second, he seemed like a happy person.

He was joking that putting the paper in each bag, that indicates in which body parts it helps when you use them, is useful to sell them more since it attracts foreigners effectively.

Anyway I purchased them too. 🙂
It cost around 5 dollars from what I can remember.
They could be quite pointy so you can gently use them with closing motion in your hands.